This will be my last week contributing to the Journal Record--at least in my current capacity. As of today, Wednesday, Sept. 29, I am writing full-time for the Lagniappe Weekly in Mobile.
I can only count on one hand the times I’ve had to make a decision this defining. Marion County has been so good to me. My employees are incredible, and the readers and friendships I’ve made have been nothing short of outstanding.
As a student of this community for the last four-and-a-half years of writing here, it seems odd to me to try and return any parting wisdom.

MLK wasn’t the only one to have a dream. We all have one of those. Your value isn’t something that is placed on you by another.
Your value comes from inside.
YOU get to decide!
MLK’s dream didn’t die with him. The beat goes on.
When I was younger, my new husband and I were in the army.
We’d left my hubby’s well-off family (they owned several businesses, a new home so large it had a rifle range in the basement, and a lot of land), however, by the time we’d returned home, everything they owned had been sold.

WINFIELD — a Winfield girl who was reported missing on Saturday, Sept. 4, was found on Monday, Sept. 6, unharmed.
According to Lt. Brad Burroughs with the Winfield Police Department, the 16-year-old told parents on Friday night, Sept. 3, that she was going to stay at a friend’s house. But when her parents checked the next morning, she was not where she said she would be.

HAMILTON - Marlon Holloway, who serves as the Director of Veterans Service Office (VSO) at the Alabama Department of Veterans Affairs, has put forth his plan to honor veterans in the county to the Hamilton City Council.
Holloway addressed the council during a regular meeting gon Monday, Sept. 20, to discuss the idea with mayor Bob Page.
“We don’t do what I would consider a class-act Veterans Day program,” said Holloway.
“I hear it from spouses and people who know veterans. We should do more.”

Hackleburg – With the Panthers’ 40-8 win over the Cherokee Chiefs on Friday, Sept. 17, Hackleburg head football coach Rod Hudson has marked his 100th career win.
Hudson, 50, has coached for the last 28 years. He said he began as an assistant coach at Parrish High School in Walker County and then later as an assistant at Winfield City High School. He coached as an offensive coordinator for the Hackleburg Panthers under former head coach Johnny Hardin (1989-2008) and was named head football coach in 2009.

By LOUIS MELLINI Staff Writer HAMILTON - After the incidents that have taken place in Kabul, the Journal Record sat with former U.S. Marine Marlon Holloway, who served several years in Afghanistan, to speak about his experiences in the region on Tuesday, Sept. 21. Holloway was born on July 28, 1963, in Mobile and moved to Hamilton in the summer of 1975. He graduated from Hamilton High School in May 1981 and very soon thereafter, joined the U.S. Marine Corps in September 1981. “I wanted to get the hell out of Hamilton,” Holloway said, laughing. 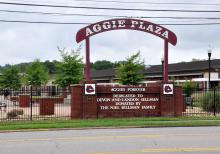 HAMILTON – Should Hamilton form its own city school system? They want to hear from you.

The City of Hamilton announced on Wednesday, Sept. 22, plans to host a public forum to discuss the issue openly. The forum is scheduled for Thursday, Oct. 14, at 6 p.m. and will take place in the Hamilton Police Department’s courtroom (former Hamilton City Hall).

BERRY - Marion County High School Red Raiders spoiled Berry’s homecoming game on Friday, Sept. 17.
A last-minute touchdown by the Red Raiders in regulation would send the game to overtime and Marion County would clinch the win 20-14.

In last week’s predictions, I went 4-2. I failed to foresee a loss by Hamilton and Brilliant. Let’s see if I can improve this week.