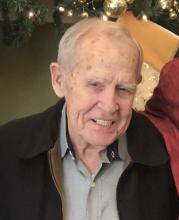 Jimmie Harold Moore passed away on Wednesday May 11, 2022, at the age of 86.
He was born on Feb. 16, 1936, in Hackleburg to the late William Markie Moore and Grace Giddy Moore Turner. He passed away peacefully from Alzheimers surrounded by his loving family at a care facility in Ridgeland, Mississippi.
Mr. Moore graduated as Valedictorian and Class President from Hackleburg High School in Hackleburg in 1954. He loved his hometown memories and took his family to Hackleburg football games and alumni banquets through the years. He served in the US Army from 1954 -1957 during the Korean War. He worked on the Mercury Rocket Project at Redstone Arsenal in Huntsville, which was the first human spaceflight. He graduated Summa Cum Laude from Howard College (Samford) in Birmingham with a degree in Pharmacy in 1963.
He married Kay M. Howse on Feb. 12, 1965, in Cullman. They had three daughters Dana, Tara and Christy. He loved spending time outdoors with his family, boating, hunting, fishing, growing gardens and cheering on the Crimson Tide.
He specialized in hospital pharmacy and was Director of Pharmacy at Good Samaritan Hospital in Selma and Lamar Regional Hospital in Vernon. He was President of the Alabama Society of Hospital Pharmacists in 1974.  He worked in hospital pharmacy for 40 years.
He is survived by his wife - Kay Howse Moore of Brandon, Miss.; daughters  - Christy (Kelly) White of Brandon, Miss., Tara (Mike) Cronin of Brandon, Miss., and Dana Greeson of Ider. Papaw adored his six grandchildren - Kathryn and Sydney White, Garrett and Daniel Greeson, and Matthew and Caroline Cronin. He is also survived by nephews - Johnny Bull, Donnie Bull and Richard Bull of Mobile;  sister-in-law - Virginia Moore of Trussville; and niece - Connie Pike of Atlanta, Ga.
He was preceded in death by his father - William Markie Moore of Cullman; mother - Grace Giddy Moore Turner; and aunt - Jackie Idella Moore of Hamilton; sister - Gwen Moore (John) Bull of Mobile; and brother - Hughvon Moore of Trussville.
The funeral service for Mr. Moore was held on Saturday, May 14, 2022, from the Hamilton Funeral Home with graveside service following at the Cedar Tree Cemetery in Hackleburg.
Pastor Ted Burleson of the Hamilton Church of Christ was the officiating minster.
Pallbearers were his sons-in-law and grandsons.
In lieu of flowers, the Moore Family asks that donations be made to Hackleburg High School, The Alzheimers Association or The American Cancer Society.
Hamilton Funeral Home
161 Falcon Circle
Hamilton, Ala.  35570
205-921-3197