Nevin Elkins attempts a pass during their last game.

By Louis Mellini
Staff writer
VALLEY HEAD — The Phillips Bears suffered a season ending loss against the Valley Head Tigers away from home on Friday night, ending their season after just one round of playoff football.
Valley Head opened the scoring with two touchdowns in the first quarter, leaving Phillips with a mountain to climb early on in the game.
Valley Head scored 28 more points in the second quarter, but Phillips was able to respond with a touchdown of their own before the half.

By Shelly Hess
Courtesy of the Northwest Alabamian
ADDISON — The Phillips Bears’ regular season ended in disappointing fashion Friday night, Oct. 21, with a 45-12 loss to Addison.
The Bears started out great on defense, forcing a punt, but a fumble by the offense was recovered by Addison’s Bradley Willette, turning the ball back to the Dawgs and giving them great field position at the Bears’ 35 yard line.  Jed Wilkins was in for Addison on the next play, and Wilkins hit Briley Hayes for two more to make it 8-0.

Phillips’ Bo Green gives a signal as he heads toward the Cougar’s end zone.

By Chad Fell
Courtesy of the Northwest Alabamian
BEAR CREEK — The door to the 1A Region 8 state playoffs just opened a little wider for the Phillips Bears, after their 56-26 defeat of regional foe the Waterloo Cougars Friday night, Oct. 14.
The victory puts the Bears 6-2 on the season and 5-2 on the region. The loss puts the Cougars 2-5 on the season.

Phillips’ Hayden Hulsey adds yards to the game with Hackleburg.

By Amy Melson
Courtesy of the Northwest Alabamian
BEAR CREEK — Tempers ran hot when the Phillips Bears hosted the Hackleburg Panthers last week. The previously 6-1 Bears played hard but could not defeat the Panthers, who added a third victory to a winning streak that represents a comeback from early season losses. In the end, the Panthers won 50-34.

By P.J. Gossett
General Manager
BEAR CREEK — The Phillips Bears shut out the Vina Red Devils 46-0 during homecoming Friday, Sept. 30. It only took the first half of the game for Phillips to total 46 points on the field. The game ended at half time with a score of 46-0, after homecoming festivities.
Phillips began by kicking off to Vina, and after their punt and on Phillips’ first down, Joshua Mann roared off to the end zone for a 74 yard run. Hayden Hulsey’s PAT failed, lighting up the scoreboard 6-0, Phillips.

BEAR CREEK        -  Two undefeated teams once again entered the grid Friday night, Sept. 16, but the Meek Tigers’ winning streak remained hot with a 40-6 defeat of the Phillips Bears.
After a few swapped possessions and no score on the board,  A deep Tiger pass was picked off by Lathan Burton for the Bears for possession deep at the Tiger 10.  Tiger defenders kept the plays short and on 4th down, Hayden Hulsey attempted a field goal from 15 yards out, with 3:30 in the first quarter. The ball failed to part the uprights, leaving it scoreless.

By P.J. Gossett
General Manager
CHEROKEE — The Cherokee Indians went bear hunting Friday night, Sept. 9, according to one of the signs on the field, but the tribe failed to overtake the Phillips Bears, ending the game 50-14 in favor of Phillips.
Phillips won the coin toss but deferred to the second half and started off with a fumble on their second first down on the night, but the Indians couldn’t find a way to Phillips’ end zone and turned the downs back over to Phillips.

FLORENCE — The Phillips Bears (2-0, 1-0) took a trip to Florence Friday, Sept. 2, and came away with a 41-6 victory over the Flame at Shoals Christian.
Due to this week’s early deadline, the story will be in next week’s edition. 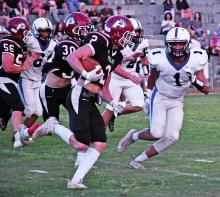 Hayden Hulsey on the carry.

By Shelly Hess
Courtesy of
Northwest Alabamian
BEAR CREEK — Phillips High School kicked off their 2022 football season Friday night, Aug. 26, against Tharptown, ultimately taming the Wildcats 37-22, even after a late rally by the visitors.