By Louis Mellini
Staff writer
HAMILTON — Hamilton resident Eguel Belk celebrated her 103rd birthday this past week, with her party being held on her birthday on Wednesday, Jan. 18, at the North Mississippi Medical Center-Hamilton Nursing Home.
Belk, born in 1920 and a longtime resident of Hamilton, was raised on a farm in the Bexar community and attended the Ada Hannah School. Her parents were Carl Elliott and Eva (Wesh) Elliott.
“We just went to church and worked on the farm,” said Belk. “I’d help my daddy plow out on the farm.”

An electronic sign displays “Do Not Enter” and “One Way” as striping is completed on the new one way street.

By Louis Mellini
Staff writer
HAMILTON — Hamilton residents may have noticed lots of work being done near the Marion County Courthouse. Crews were busy Monday morning taking down the street light right before Hamilton’s main intersection and installing a blinking yellow light in its place.
For 30 days, Hamilton will not be using the old traffic light located at 1st Avenue and Military Street South.
On Monday, Aug. 15, the Hamilton City Council made the decision to cover the lights and make 1st Avenue Southeast a one way road.

By Louis Mellini
Staff writer
HAMILTON — Hamilton pickleball enthusiasts will be delighted to hear that the City of Hamilton approved the construction of two new pickleball courts near the Hamilton tennis courts near the recreation center during the Jan. 17, meeting.
The project has an estimated cost of $38,908.
Pickleball, similar to tennis, is an indoor or outdoor racket/paddle sport where two or four players hit a perforated hollow polymer ball over a 36-inch-high net using solid-faced paddles. 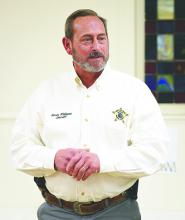 Marion County Sheriff Kevin Williams has 35 employees in his department. 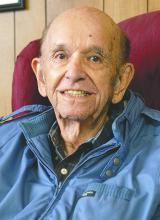 By Louis Mellini
Staff writer
HAMILTON —Hamilton resident and World War II veteran Marvin Cecil Rye passed away last week on Tuesday, Jan. 3, at the age of 98.
Rye, who was born in Detroit on Oct. 30, 1924, was one of the 13 children born to John and Millie Rye.
“It was wonderful,” Rye said about growing up with 12 brothers and sisters during an interview with the Journal Record in 2021. “We disagreed some, but we got along.” 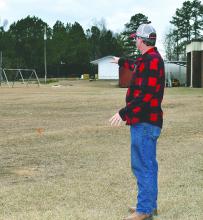 District 5 Commissioner Larry Akers stands on the playground at Brilliant Elementary, showing the area needing to be leveled.

By P.J. Gossett
General manager
HAMILTON — Recess is still an important part of the elementary school day by providing a short break from schoolwork. To keep the children as safe as possible, improvements are looking to be made at the playgrounds of both Brilliant and Guin elementary schools. Attention to ways of improvement was brought to the attention of District 5 County Commissioner Larry Akers, and he approached the Marion County Board of Education at their last meeting on Thursday, Dec. 15, to see how the two could work together to achieve the improvements.

By Louis Mellini
Staff writer
HAMILTON — Hamilton’s new track facility now officially has the green light for construction after the Hamilton City Council unanimously voted to begin putting out bids on the project.
Phase One of the Hamilton Track Facility, located at the old Munsingware property, is estimated to cost approximately $4.7 million.

By Louis Mellini
Staff writer
HAMILTON — Hamilton’s annual Christmas parade was postponed after some chilly and rainy weather blew through Hamilton on Monday, Dec. 5. Hamilton Mayor Bob Page stated he and councilman Scott Tyra were working with the Hamilton Area Chamber of Commerce, who organizes the event every year, to choose a new date.
The announcement for the new date occurred past press time Monday.

My, how the years have changed. This photo is the grammar school in Hamilton and dated 1910. It is courtesy of Bill Weaver.
Things to look for: notice the hat on the window and a little boy in the front row making a face by pulling below his eyes. While many are dressed in their “Sunday best,” several have no shoes on their feet.