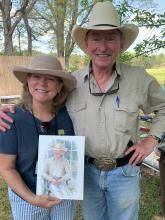 The armory in Winfield stands vacant. The town plans to purchase the building to use as a new city police department.

By Luke Brantley
Staff writer
WINFIELD — The City of Winfield is moving forward with plans to purchase the old national guard armory. The building, if purchased, will serve as a new police station, according to Mayor Randy Price.
“What we’d like to do is move our police department over there, because they are out of room,” Price said. “We’d move the whole police department and court system over there and make it a municipal building. We’d remodel it to where the police would have more room.”

TWIN — Concluding almost three years of persistent effort and teamwork, the Twin Town Council hosted a public open house to showcase a new community center and storm shelter.
The two-hour event was held on Sunday, April 24, with dozens of visitors from across Marion County in attendance to see the finished product. The facility was originally constructed to serve as the home of Habitat for Humanity of Northwest Alabama, which had since ceased operations leaving the almost new facility vacant. 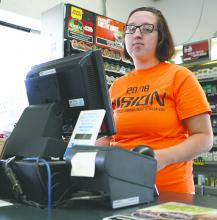 Katie Harrison was the victim of the Citgo robbery on April 15 in Hamilton. The suspect stole $747 in cash and held Harrison at gunpoint.

By Louis Mellini
Staff writer
HAMILTON — Hamilton resident Katie Harrison was caught in the middle of an armed robbery this past week at the Citgo gas station convenience store located on U.S. Highway 43 at the old Harper’s Junction.
The robbery took place at 5:30 p.m. on April 15 while Harrison, who is six weeks pregnant with her third child, was the only person working inside the convenience store.

By Louis Mellini
Staff writer
HAMILTON — The inaugural Marion County Stampede is nearly here and event coordinator Matt McCracken is rallying support and sponsorship for the event that will take place in Hamilton.
McCracken addressed the Marion County Commission to ask for sponsorship during a regular meeting held on Monday, April 18, at the commission office in Hamilton.

Missy Miles stands in front of a mural she created originally and will soon update.

By Luke Brantley
Staff writer
GUIN — Local artist Missy Miles will begin renovating the “Freedom Eagle” mural in downtown Guin this week. Miles originally painted the mural back in 2008, but over time, some of the colors and finer details have faded in the sun.
The mural is painted on the side of the Marion County Banking building overlooking Guin Memorial Park on the corner of U.S, Highway 43 and U.S. Highway 278. By Louis Mellini
Staff writer
HAMILTON — Governor Kay Ivey made her well anticipated visit to Hamilton at the Tombigbee Electric Cooperative facility on Wednesday, April 20.
Ivey came to Hamilton and addressed the public in an event hosted by the Hamilton Area Chamber of Commerce. Marion County EMA Director Eric Terrell speaks to first responders and officials in Marion County about emergency preparedness at the House of Plenty in Hamilton on Thursday, April 14.

By Louis Mellini
Staff writer
HAMILTON - Marion County Emergency Management Agency Director Eric Terrell assembled a large group of municipal officials and first responders to meet in a major emergency preparedness meeting held in downtown Hamilton at the House of Plenty on Thursday, April 14.
In attendence were municipal mayors and officials from all first reponder organizations in the county. HAMILTON — The Hamilton Police Department is currently working a missing person case.
Resident Justin Kyle Lovett was last seen on Monday, April 11, at approximately 8 p.m.
Lovett is five feet, seven inches tall and weighs approximately 180 pounds and has brown hair.
Anyone with information on Lovett’s location is encouraged to contact the HPD at 205-921-7424.

By Luke Brantley
Staff writer
GUIN — Burglars broke into McGuire Drugs in Guin early in the morning on Thursday, April 14. According to owner Ralph Christopher, the burglars broke the glass in the front door around 1:30 and were gone within two minutes.
“They were in here for two minutes,” Christopher said. “I got a call and got down here at 2 a.m. The police were here, and there wasn’t anybody here. The police left, but I stayed here and slept in a chair until 8 a.m.” By Louis Mellini
Staff writer
HAMILTON — A tractor trailer fire occurred on Interstate 22 on Thursday, April 14.
At approximately 8:30 a.m., the Byrd and Shottsville volunteer fire departments were dispatched by Marion County E-9-1-1 to the report of a tractor trailer fire on I-22 near mile marker one.
Upon arrival, firefighters were met with heavy traffic and a well involved tractor trailer fire in a road construction zone.
Hamilton Fire Department was requested for an additional water tanker.

By Louis Mellini
Staff writer
HACKLEBURG — Hackleburg Police Chief Kenny Hallmark is officially back after being appointed by Mayor Darryl Colburn a little over a month ago.
Hallmark stated that he has enjoyed his work so far and is ready to stabilize the police force in the town and get back to how things were before he left in 2018.

By Louis Mellini
Staff writer
HAMILTON — Governor Kay Ivey is making her way to Hamilton on Wednesday, April 20, at 10 a.m. at the Tombigbee Electric Cooperative, located at 3196 County Highway 55.
The event is open to the public and all  residents are encouraged to attend the event.

By Louis Mellini
Staff writer
Marion County Engineer Mike Shaw, 62,  has retired after 23 years working to improve the county.
The empty position Shaw leaves behind will be filled be Hamilton native Chris Wilbanks who will start his work on Friday, April 1.
“I’m getting older, and I want to spend time with my family--my kids and my grandkids. I want to maybe do a little traveling,” said Shaw.
Shaw stated that he feels that he has done a good job alongside his workers and Marion County Commissioners.

By Luke Brantley
Staff writer
WINFIELD — The Winfield Chamber of Commerce announced via Facebook post on Wednesday, March 23, that Mule Day is happening this year.
The annual event was called off the last two years in a row due to COVID-19 but is now scheduled for September 23-24 of this year.
Chamber of Commerce President Zac Hallmark said everything is set to move forward.

By Louis Mellini
Staff writer
HAMILTON — The prospect of the Hamilton City School System is an idea no more after the Hamilton City Council reached an agreement with the Marion County Board of Eduacation on Monday, March 21.
Hamilton Mayor Bob Page stated that the city is waiting for the agreement between the two parties to be completed, but an agreement was unanimously approved during Hamilton’s City Council meeting on March 21.

By Louis Mellini
Staff writer
HAMILTON — Hamilton’s downtown area is gaining a major improvement as its curbs will now be handicap accessible.
Crews have been working everyday for the past week to complete the project that will make sure those who are handicapped are able to safely exit and enter sidewalks in the downtown area.

By Louis Mellini
Staff writer
HAMILTON — Hamilton’s Lake Reed, younger brother of Hamilton City Councilman Ross Reed, made his return home on Thursday, March 17, drawing a big welcome from the Hamilton community.
Lake suffered a brain bleed in late January and has gained the support of those in the Hamilton and Marion County community.
Lake, 10, is the son of Mike and Michelle Reed and brother to Ross and Cole Reed.