HAYLEYVILLE - Two newspapers owned by Haleyville-based Mid-South Newspapers— the Northwest Alabamian and the  Journal Record—were recognized as being the most improved publications statewide.­
(Mid-South Newspapers also owns the Fayette County newspaper, the Times-Record, and the Pickens County Herald in Carrollton.)
The Alabama Press Association (APA) held its summer convention on Saturday, June 29, at the Perdido Beach Resort in Orange Beach, where the winners of the 2019 APA Media Awards (AMA) contest were announced.

HAMILTON - The Hamilton City Council discussed options for the old city hall building during its work session on Wednesday, June 26.
The old city hall currently serves as the police station and will soon house a West Alabama TV Cable office on July 25.
The building, located at 422 2nd St. SW, across from Hamilton High School, has seen better days, according to the city council.

GUIN - The Guin City Council voted unanimously to remain in the C3 Economic Development Alliance (EDA) of Northwest Alabama during its Monday, July 1, meeting.
The C3 is a marketing alliance of three counties—Marion, Fayette and Lamar counties—and certain towns within those counties, that markets the region to businesses and industries looking to locate or relocate.
Guin Mayor Max Maddox opened the discussion by noting that the council voted to pay the $10,000 membership dues in 2017 and 2018.
Councilman Bobby Bellew made a motion to pay the dues.

HAMILTON - Officials with Alabama Power have announced that the Hamilton business office’s closing date has been set for Wednesday, July 31.
Initially, information released by the power company only said the Hamilton office would be closed by Aug. 30.
Tuscaloosa-based Alabama Power Western Division Public Relations officer Danielle Kimbrough confirmed with the Journal Record on Monday, July 1, that the July 31 closing date had been decided upon.

HAMILTON - The Marion County-Rankin Fite Airport in Hamilton will receive $474,166 as a part of the state-wide $9.7 million Federal Aviation Administration (FAA) grants awarded by the Department of Transportation.
The grant will go towards construction of the taxiway at the airport which is located on Airport Rd off of Military St South in Hamilton.
U.S. Senator Richard Shelby made the announcement on Tuesday, July 2, stating that the grants will significantly aid development projects in local airports across the state. 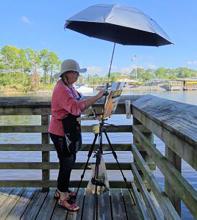 HAMILTON - The “Alabama Then & Now 1819-2019” art exhibit by the Alabama Plein Air Artist will be stationed in Hamilton beginning next month in celebration of Alabama’s Bicentennial year.
The artists will be displaying their “Alabama Then & Now” collection which is a commemorative and educational art exhibition of 30 original paintings.
The exhibit will be hosted in the Hamilton City Hall lobby area from Aug. 1 - Sept. 23.

HAMILTON -  Alabama Medicaid will likely increase recovery claims against estates.
A new law will require estate  claim notices be mailed directly to Medicaid in a measure which Alabama lawmakers hope will better enable the state agency to recover healthcare funds spent on individuals.
Marion County Probate Judge Paige Vick told the Journal Record that under the new law passed during the 2019 Legislative Session, estate claims opened after Sept. 1 of this year will be required to mail notices to the state Medicaid agency.

The Yellow Hammers performed during the Hamilton Area Chamber of Commerce’s First Fridays event held on Friday, May 3, in downtown Hamilton. Shown performing are (from left) Conner Nix, Colby Nix and Cody Bass.

HAMILTON - The Hamilton Area Chamber of Commerce will be hosting its final “First Fridays” downtown shopping event on Friday, Aug. 2.
The chamber’s final First Friday’s event was originally scheduled for Friday, June 7. However, it was cancelled due to rainy weather.
The final summer event will take place from 7-9 p.m. with local and satellite vendors setting up booths lining the city square and downtown businesses extending their usual hours to host shoppers.

HAMILTON -  The Marion County Commission voted 3-2 in favor of reallocating funds received from gas taxes after a heated debate during its regular session meeting on Monday, June 24, at the commission office in Hamilton.
Before the reallocation was approved, each of the five districts were receiving an even 20% each, a motion approved in 1971. The new reallocation changes that — Districts 1, 2 and 3 will receive 22% and Districts 4 and 5 will receive 17%.

HAMILTON - America is in the middle of an epidemic. The disease? Opioid addiction.
And Alabama is in the hotzone.
The Statistics

Emergency personnel tend to an injured victim after a two vehicle wreck on Highway 129 in Winfield on Monday, June 17.

WINFIELD - Two people remain in critical condition at North Mississippi Medical Center in Tupelo, Miss., after a two-vehicle wreck at 2 p.m. on Highway 129 at Marion County Road 38 in Winfield on Monday, June 17.
According to information released by the Winfield Police Department, Gregory Monroe Bourland, Brilliant, driving a green 2007 Chevrolet Uplander van, was pulling out of the Cedar Landing Restaurant parking lot when the vehicle was struck by a 1998 Mercury Mountaineer driven by Denita Monique McCollum, Fayette County.

GUIN - Former Guin Police Chief G.B. Blaylock was remembered fondly by those who worked for him and with him in the Guin City Hall. Blaylock, 76, who served as Guin police chief from 2005 to 2015, passed away on Thursday, June 13. 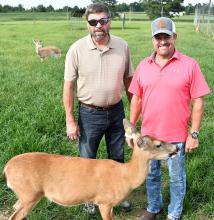 HAMILTON - When most outdoorsmen think of the fall hunting season, they think of pleasant days spent in the woods hunting with friends and family. But for a few local deer farmers, the upcoming hunting season brings fear and trepidation and thoughts of the destruction of their livelihood.
“It’s scary, it really is scary,” said deer farmer Kevin Armstrong.

The new bridge over Northfork Creek between Hackleburg and Hamilton is now open to traffic, rendering travel somewhat safer. The original bridge was built in 1931 and reconstructed in 1982. Over the years a number of deaths resulted from the traffic accidents that officials attributed to the terrain and design of the old bridge. The new bridge is wider and straighter. For a comlete story see page 6A.

HACKLEBURG -  The project to make the journey to and from Hackleburg safer and easier is now coming to an end.
After a slight delay, W.S. Neal of Montgomery, who was awarded the building contract in April 2018, has completed the bridge running over North Fork Creek.

HAMILTON - Marion County’s sales tax for education has now tracked its second month in lower collections.
Marion County Superintendent of Education Ann West told the Marion County Board of Education during its meeting on Tuesday, June 11, that the county collected $129,983 in May—$4,0734 less than the previous year.
“For some reason, we were down again,” West said.
The collection was $18,000 lower than the April tax collection, when $148,082 was recorded. April also recorded lagging sales tax figures.

HACKLEBURG -  The Hackleburg Town Council announced that it will be hosting the town’s annual  Fourth of July celebration on Thursday, July 4, during a regular session meeting on Monday, June 24, at the Hackleburg Town Hall.
The event will begin at noon and will feature live music, arts, crafts, free swimming, inflatables for children, vendors, karaoke, a parade and a fireworks display.
The Hackleburg pool will be open from noon- 8 p.m. and will be free to use for those attending the event.

HAMILTON - Avoiding that emergency trip to bring a student lunch money is looking easier.
The Marion County Board of Education voted during its monthly meeting on Tuesday, June 11, to enter into a contract with Pams Lunchroom of Englewood Cliffs, N.J., a company that supports credit and debit card payments for school-related expenses.
Marion County Superintendent of Education Ann West said the service will enable parents and guardians to fund students’ lunchroom accounts remotely.

HAMILTON - Closing a six-year process, the bridge on Grandview Drive has finally been completed.
Hamilton Mayor Bob Page received a letter from the Alabama Department of Transportation (ALDOT) on Monday, June 17, approving the bridge for use.
Page opened the letter during the Hamilton City Council meeting that night. The bridge was officially opened the next day, Tuesday, June 18.
“We can use this bridge!” Page rejoiced.

HAMILTON -  The Hamilton Career Center will be hosting a Training Information Seminar on Tuesday, July 9, at the center on the Hamilton Campus of Bevill State Community College.
The seminar will begin at 9 a.m. and end at 10 a.m. Presentations will include information on the Workforce Innovation and Opportunity Act and Individual Training Accounts (WIOA/ITA) information, career exploration, the college admissions process, Labor Market information and Free Application of Federal Student Aid (FAFSA)/Financial Aid information.

HAMILTON - The Marion County Firefighters Association voted to approve a measure to relocate its Hackleburg repeater during its regular meeting on Thursday, June 27 at Bama-Q Pit & Grill in Hamilton.
A repeater is a radio tower that allows firefighters’ handheld radios and the radios in their trucks to communicate at a longer range.